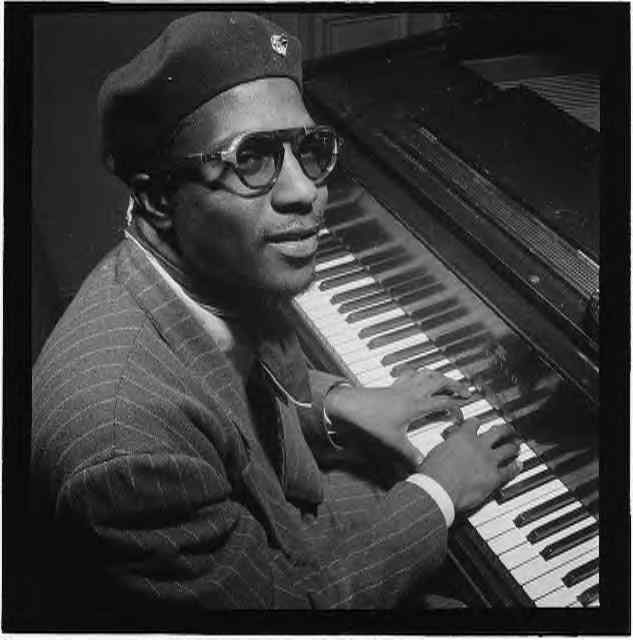 Thelonious Monk is a seminal figure in the history of jazz, pioneering an improvisational style that made him a founder of be-bop.

The Monk family moved to New York City in 1922 when Thelonious was around five and at nine he began playing the piano. Essentially a self-taught musician who dropped out of high school, Monk was briefly a teen-age evangelist before he began performing jazz.

Monk’s compositions are the antithesis of simple melodies; he used dissonant harmonies and melodic twists in compositions such as “Epistrophy,” “Round Midnight,” “Blue Monk,” “Straight No Chaser,” and “Well, You Needn’t.”

In New York, Monk became the house pianist at Minton’s Playhouse during the mid-1940s. The club was known for its after hours “cutting competitions” where musicians on the bandstand attempted to best each other. At Minton’s, Monk associated with Dizzy Gillespie, Charlie Christian, Kenny Clarke, Charlie Parker and Miles Davis. He made his first studio recordings in 1944 with the Coleman Hawkins Quartet. Unable to perform in New York City during the mid-1950s because of a legal problem (he refused to testify against a friend when narcotics was found in the friend’s car) he played out of town gigs, recorded and composed.

Monk recorded for Blue Note 1947-1952, then he recorded for Prestige. In 1954 he toured Europe and recorded in Paris; he recorded for Riverside Records 1954-1961, which released his classic album,Thelonious Monk Plays Duke Ellington.

In June, 1957 he began a six month gig at the Five Spot Cafe in New York City where his band included John Coltrane on tenor sax, Wilbur Ware on bass and Shadow Wilson, drums. He recorded for Columbia 1962-1970 and was featured on the cover of Time Magazine on February 28, 1964 in an article titled, “The Loneliest Monk.”

The Columbia Records jazz department promoted Monk heavily as he released as series of landmark albums, including studio works Monk’s Dream (1962), Underground (1968) and live albums Miles and Monk at Newport (1963), Life at the It Club (1964), and Live at the Jazz Workshop (1964).

Monk cut a debonair figure, dressed in suits, hats and sunglasses, and performed on piano in a percussive, high syncopated style.

In 1993 Thelonious Monk was given the Grammy Lifetime Achievement and in 2006 was posthumously awarded the Pulitzer Prize Special Citation for his body of work.