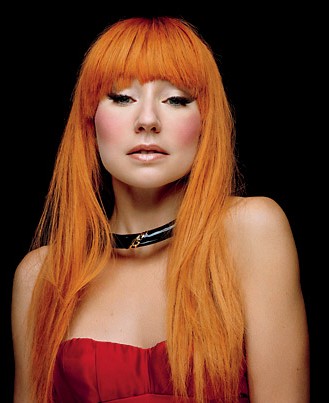 Tori Amos’s birth in Newton was a fortunate gift to the state; the Amos family lived in Washington D.C. and Tori was born while her parents were visiting North Carolina.

During the 1990s Tori Amos emerged as one of the premier female singer-songwriters, composing and performing on piano. Her chart singles include “God,” “Caught a Lite Sneeze” and “Spark,” she has been nominated for a Grammy eight times and has sold over 12 million albums.

As a child, Tori Amos studied piano at the Preparatory Division of the Peabody Conservatory of Music. Her father, The Reverend Edison Amos, was pastor of the Good Shepherd United Methodist Church and the family lived in the Washington D.C.-Baltimore area while Tori was growing up.

She began performing in clubs when she was 13 and her first single was “Baltimore,” written with her brother Mike Amos for a song contest by the Baltimore Orioles; that song won first place. She performed as “Ellen Amos” until a friend’s boyfriend suggested that “Tori” fit her better.

Tori Amos moved to Los Angeles in 1986 and became lead singer for the group “Y Kant Tori Read.” In July, 1988 the group’s debut album was released. After the group disbanded, Tori worked as a background vocalist for artists Stan Ridgway, Sandra Bernhard and Al Stewart and landed a solo recording contract with Atlantic, where she released the albums Little Earthquakes, Under the Pink, Boys for Pele, From the Choirgirl Hotel, To Venus and Back and Strange Little Girls.

In 2001 Amos signed with Epic Records and released Scarlet’s Walk, a concept album. She then released the albums The Beekeeper, American Doll Posse, Tales of a Librarian, Fade to Red and the boxed set A Piano: “The Collection.” In 2008 she created her own label and released Live at Montreaux (1991/1992), a CD and DVD.

Tori Amos’s most recent albums are Abnormally Attracted to Sin, a seasonal album Midwinter Graces and From Russia With Love, recorded live in Moscow in 2010. Her autobiography, Piece by Piece, was written with journalist Ann Powers and released in 2005.

Tori Amos is co-founder of RAINN, The Rape, Abuse and Incest National Network, a toll-free help line that connects callers with their local rape crisis center.