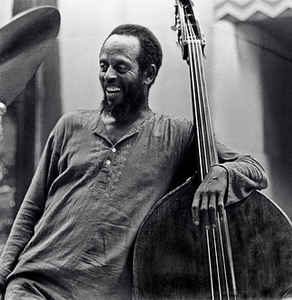 Percy Heath was born in Wilmington, North Carolina on April 30, 1923. He was a superb jazz bassist and long-time member of the Modern Jazz Quartet.

Percy grew up in Philadelphia where his father played clarinet and his mother sang in the church choir. At the age of eight he began playing violin and sang at local venues. In 1944 he was drafted into the Army and became a member of the Tuskegee Airmen. After World War II Heath decided to make music his profession so he bought a stand-up bass and enrolled in the Granoff School of Music in Philadelphia.

Heath and his brother were members of the Howard McGhee Sextet when they recorded on a Milt Jackson album in 1948 in Chicago. During the late 1940’s Percy moved to New York where he and his brother, Jimmy, worked with Dizzy Gillespie’s groups. Percy was also a member of Joe Morris’s band with Johnny Griffin.

The Modern Jazz Quartet evolved from a group formed in 1946 by members of Dizzy Gillespie’s band, John Lewis (piano), Ray Brown (bass), Milt Jackson (vibraphone) and Kenny Clarke (drums). In 1952 Brown, who was married to Ella Fitzgerald, joined his wife’s band and Percy Heath replaced him. The group became The Modern Jazz Quartet with members Lewis, Clarke, Jackson and Percy Heath. They recorded for Prestige Records 1952-1955 and for Atlantic from 1956 to 1974. Two of their best known numbers are “Django” (a tribute to guitarist Django Reinhardt) and “Bag’s Groove.” Heath also recorded for Verve, United Artists, Pablo and Apple Records.

In 1975 Percy formed the Heath Brothers with his brothers Jim (saxophone) and Albert (drummer) and pianist Stanley Cowell. Percy often played cello instead of bass with this group. In 1981 the Modern Jazz Quartet disbanded but re-united in 1981 and made their last recordings in 1993. The group received the first NAACP award for “cultural contributions to the field of music.”

Percy Heath made his first recordings as a bandleader in 2003 at the age of 80. The group was comprised of pianist Jeb Patton, bassist Peter Washington and his brother Albert on drums. They recorded an album, A Love Song, on the Daddy Jazz label. The album garnered rave reviews and served as a fitting coda for his illustrious career.

Percy Heath loved to fish and often fished at Montauk Point where, in 2006, a memorial plaque honoring him was set into a 5000 pound stone at Turtle Cove.

How High The Moon