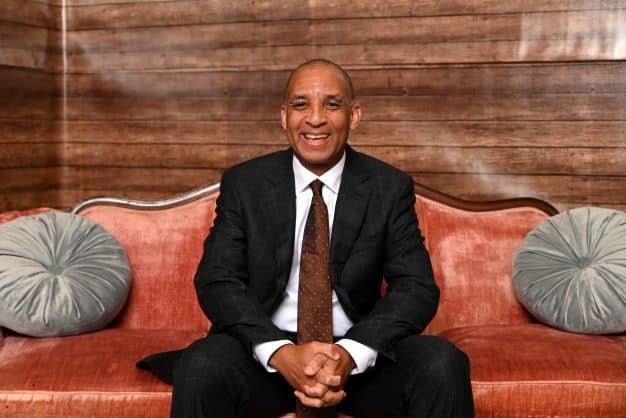 Charles Whitfield grew up in Greensboro, North Carolina. In 1987 Whitfield entered North Carolina Central University in Durham where he played basketball and graduated in 1991.  After college, Whitfield worked for Norwest Financial, a banking and financial company, but he had a dream of starting a record label.

It wasn’t until while in College Charles worked at a CD Superstore in Durham he got an interest in music. He acquired a large collection of CDs with a wide variety of music. He happened to notice on the Motown/MoJazz label the name of Steve McKeever and let’s just say that is when his dreams all started!

Whitfield through Chris Bragg, a family friend and Motown employee contacted McKeever. Whitfield borrowed money from his parents to fly to Los Angeles and met with McKeever, who was working to find investors for his new, independent label, Hidden Beach Recordings.

In November, 1998, Hidden Beach Recordings began, specializing in urban alternative, R&B, soul inspirational and contemporary jazz genres. It is distributed by the Universal Music Group, the largest recording corporation in the world. When it started, Hidden Beach had a one room office in Santa Monica, California with two employees. Charles Whitfield began as a paid intern at Hidden Beach, handling production and artist relations then joined the label to manage the company’s relationship with Epic Records (their initial distributor) and market them to music stores and other outlets.

The first artist signed to Hidden Beach was Jill Scott, whose debut release, Who Is Jill Scott? Words and Sounds Vol. 1 sold 2.4 million units and was nominated for 3 Grammys including, Best New Artist. Scott  released two other studio releases and several live projects as well. In addition, she has won 2 Grammy Awards along with the countless nominations she has received.

Hidden Beach was selected to release Yes We Can: Voices of a Grassroots Movement, a compilation CD whose proceeds benefited the Barack Obama campaign for President. Artists on that CD included Kanye West, Stevie Wonder and Sheryl Crow. It was released in September, 2008.

Additional Artists on the Hidden Beach label have included BeBe Winans (his “My Christmas Prayer” was a best-seller in 2003), Brenda Russell, Darius Rucker, Al B. Sure!, The Tony Rich Project, Naturally 7, husband and wife singing duo Kindred the Family Soul, saxophonist Mike Phillips, trombonist Jeff Bradshaw and the very popular “Hidden Beach Recordings Presents: Unwrapped” contemporary jazz series of projects, all which debuted at Number 1 on the Billboard jazz chart.

In addition to Hidden Beach Recordings, Charles was one of the investors in the Uptown Charlotte Jazz Fest that started in 2010 and in 2015 the name changed to the Queen City Jazz Fest. He also worked for the Beasley Media Group radio cluster in Charlotte from 2012 until late 2020. Charles became a Community Relations Manager for Lowe’s Companies Inc in 2021.

Dreams really can come true— Charles Whitfield is not a musician but has been on the business side for over twenty years and he has a few Platinum and Gold Records hanging on his wall as a testament to his hard work in the music business.  Whitfield thanks all of his family and friends for all of their continued support over the years as well.