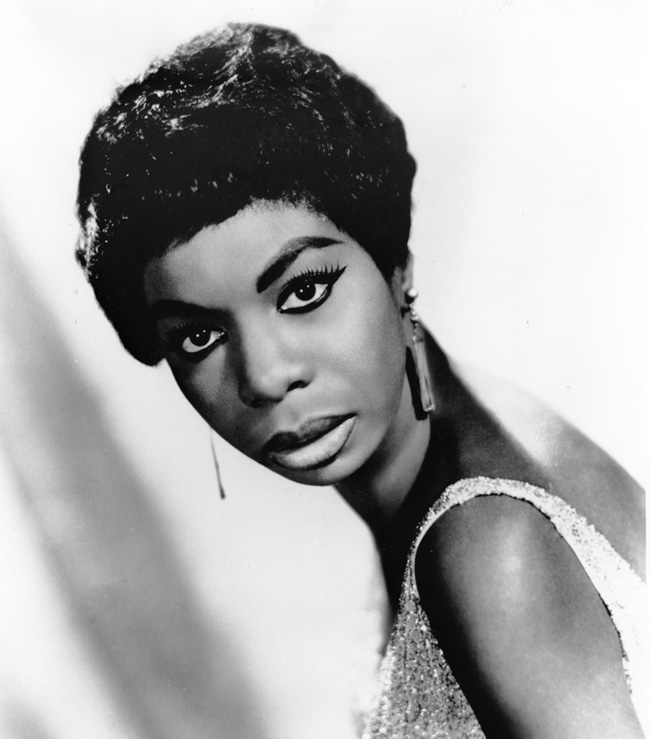 Known as “The High Priestess of Soul,” Nina Simone recorded over 40 albums during her career and is known for songs such as “I Put a Spell on You,” “To Be Young, Gifted and Black,” “Don’t Let Me Be Misunderstood,” “Four Women,” “Sinnerman,” “Mississippi Goddamn,” “My Baby Just Cares for Me” and “I Want a Little Sugar in My Bowl.” She was an imposing presence with a regal bearing and firm convictions that made each of her concerts a “happening.”

Born Eunice Waymon in Tryon, North Carolina, one of eight children born to John Divine Waymon, a handyman and barber and Mary Kate Waymon, a Methodist minister, she began playing piano when she was three. Her mother worked as a maid and her employer recognized the young girl’s talent and funded piano lessons. At the 12, Eunice gave a classical recital and at 17 moved to Philadelphia. Although she was dedicated to classical music, in 1954 she began playing a set of jazz, blues and classical at the Midtown Bar and Grill in Atlantic City and also began to sing. This is where she took the name “Nina Simone” so her mother would not discover she was playing “the devil’s music.” “Nina” was a nickname a boyfriend called her while “Simone” came from the French actress Simone Signoret.

In 1958 she recorded George Gershwin’s “I Loves You Porgy” from the opera, Porgy and Bess, which she had learned from a Billie Holiday album. This song reached number two on the R&B chart and was a top 20 on the pop chart in 1959. Her first album, Little Girl Blue, was released on Bethlehem, then she signed with Colpix Records before signing with Philips and releasing Nina Simone in Concert in 1964. In this album was “Mississippi Goddam,” a reaction to the murder of Medgar Evers and the bombing of a church in Birmingham where four young black girls were killed. From this point forward, Nina Simone was actively engaged in the Civil Rights movement, recording songs addressing racial equality on her albums and live shows.

In 1967 Simone signed with RCA Victor and adapted “To Be Young, Gifted and Black,” an unfinished play by Lorraine Hansberry, into a civil rights song. It was released on her album Black Gold in 1970.

In September, 1979, Simone left the United States for Barbados; she then lived in Switzerland and the Netherlands before settling in France in 1992, the same year her autobiography, I Put a Spell On You, was published. The following year her last album, A Single Woman was released.

In 1993 Simone settled in southern France, near Aix-en-Provence, where she lived the final decade of her life. She died in her sleep and her ashes were scattered in several African countries.

Ain’t Got No…I’ve Got Life

Don’t Let Me Be Misunderstood

I Put A Spell On You

Black Is The Color Of My True Love’s Hair

Her Experience Of Racism As A Child