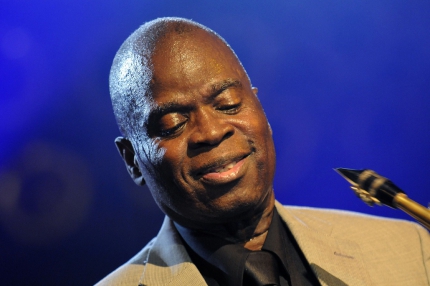 Maceo Parker was the saxophonist in the groups that laid down the foundation of funk, rap and hip hop. He attended college in North Carolina but graduated from the University of James Brown. When he was on James Brown’s funky soul funk train James could be heard saying “Maceo, I want you to Blow!” when it came time for a solo. This band was the early pioneer of modern funk and hip-hop.

Maceo also played with another pioneer of funk, rap and hip hop: George Clinton and Parliament-Funcadelic as well as Bootsy Collins and Prince.

Maceo Parker was born in Kinston, North Carolina on February 14, 1943. In 1964 Maceo was studying music in college when James Brown stopped at a club where Maceo’s brother, Melvin was drumming. Brown offered Melvin a job and, a year later, Melvin took that job—after telling Brown that his brother Maceo played sax and needed a job. James asked Maceo if he owned a baritone sax; Maceo replied “yes” and then went out and bought one.

For his work with those two groups, Maceo became the most sampled musician of rap and hip-hop artists.

Maceo Parker has been honored by the Rhythm and Blues Foundation with a Pioneer Award as a sideman and as part of the history of R&B. Since the 1990s, Maceo Parker has performed primarily with his own group, playing, in his words, “2% jazz, 98% funky stuff.”