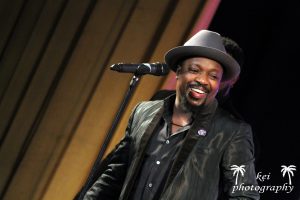 Anthony Hamilton was born in Charlotte, North Carolina and began singing in his church’s choir when he was ten. As a student at South Mecklenburg High School, he sang in the choir directed by Mark Setzer.

Hamilton met producer Mark Sparks in 1992 who encouraged Hamilton to move to New York where he was signed to Uptown Records, led by Andre Harrell. Hamilton was co-writer for “U Know What’s Up,” a hit single in 1999 for singer Donell Jones. Hamilton was a backup singer for D’Angelo’s international tour.

Hamilton sang on the 2002 single, “Po’ Folks” by Nappy Roots; that earned a Grammy nomination for ”Best Rap/Sung Collaboration.” “Po Folks” was the second single from the album Watermelon, Chicken & Gritz, which was a multi-platinum album.

Hamilton continued to collaborate with Nappy Roots on the album Wooden Leather with the singles “Sick & Tired,” “Push On,” and “Organic. He was also featured on the Nappy Roots single “Down N’Out” from the album The Humdinger and was featured, along with Nappy Roots, in Mark Ronson’s single, “Bluegrass Stain’d”  which was released through Elektra Records.

Jadakiss featured Hamilton on their 2004 Grammy-nominated hit, “Why.” Hamilton was featured on two songs by 2Pac, “Thugz Mansion” and “Dear Mama” that were remixed.

Hamilton’s first album, Soulife, was a compilation album comprised of song he recorded early in his career. This was released in June, 2005. On December 13, 2005, Hamilton released his third studio album, Ain’t Nobody Worryin, which went gold.

Anthony Hamilton was featured on tracks by artists, including RH Factor, Angie Stone and Buddy Guy.

During the BET Awards in 2006, Hamilton received the ‘Cool Like That’ Award. Comedian Dave Chappelle had Hamilton as a guest on Chappelle’s Show on Comedy Central (episode 6 season 2). He was featured on Jill Scott’s hit single, “So In Love” in 2011; thhat track was number one on the Urban AC charts for 19 weeks.

Anthony Hamilton was featured on two releases on Def Jam in 2012, Big K.R.I.T.’s Live from the Underground and Life Is Good by Nas, which was a number one album on the Billboard 200 chart.

In 2015 Hamilton made a cameo appearance on the TV show Empire, where he performed “Point of It All.”

In February, 2016, Hamilton performed at the White House in an event hosted by President Barack Obama and First Lady Michelle Obama that was a tribute to Ray Charles.

In April, 2016 Hamilton toured on a very successful tour with a fellow Hall of Fame inductee, Fantasia.

Anthony Hamilton is not only a artist, producer, and songwriter–he is also an author. He used his southern roots and passion for music to create his book, “Cornbread, Fish’n Collard Greens.

Hamilton always remembers his roots in the church choir and success in the 21st century, while continuing to tour across the country and around the world.

Comin’ From Where I’m From

You Made A Fool of Me