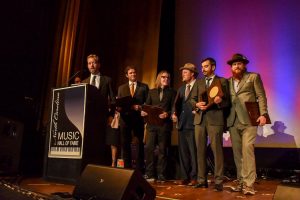 The members of the Steep Canyon Rangers first met in 2000 when they were enrolled at the University of North Carolina in Chapel Hill. The group began with guitarist Woody Platt, banjoist Graham Sharp, and upright bassist Charles Humphrey III. Mike Guggino soon joined on mandolin and then fiddler Lizzie Hamilton joined the group. This original group toured and performed at festivals and recorded two albums of original music, Old Dreams and New Dreams and Mr. Taylor’s New Home.

At the Rockygrass Festival in Lyons, Colorado, the Steep Canyon Rangers won first prize, which led to them being featured on a main stage performance the following year. In 2003, Lizzy Hamilton left the group and several fiddlers filled in during their tours and on their eponymous 2004 CD: Steep Canyon Rangers.

In July 2004, Nicky Sanders joined the group as a fiddle player and The Rangers recorded their fourth album, One Dime at a Time (2005) produced by Mike Bub from the Del McCoury Band. In 2006, the group won the Emerging Artist of the Year by the International Bluegrass Music Association (IBMA). In 2007, they released their fifth album Lovin’ Pretty Women and were nominated for two IBMA awards, Best Album for Lovin’ Pretty Women, and Gospel Performance of the Year for their song, “Be Still Moses.” “Mourning Dove,” a fiddle tune by Nicky Sanders, was nominated for Instrumental Song of the Year by the IBMA in 2010.

Steve Martin asked the Steep Canyon Rangers to accompany him for a performance in a benefit concert at the Club Nokia in Los Angeles for the Los Angeles Public Library in May, 2009. The concert was a success and led Martin to ask the group to join him on his “World Bluegrass Tour.” Steve Martin and the Steep Canyon Rangers performed at Carnegie Hall in New York, the Royal Festival Hall in London, the Wang Center in Boston, the Bonnaroo Music Festival and at bluegrass festivals in the U.S.

Steve Martin and the Steep Canyon Rangers recorded their first collaborative album, Rare Bird Alert, in Asheville, North Carolina during the summer of 2010. The album’s songs were primarily written by Martin and featured guest appearances by Paul McCartney and the Dixie Chicks. That album was nominated for a Grammy in 2012. In 2011, Steve Martin and the Steep Canyon Rangers were named “Entertainers of the Year” at the IBMA Awards ceremony in Nashville.

The Steep Canyon Rangers signed with Martin’s home label Rounder Records in 2011 and recorded two collaborations with Martin in addition to three of their own. Percussionist Michael Ashworth was added to the group in 2013. The Rangers’ solo album, Nobody Knows You won a Grammy for Best Bluegrass Album in 2013.

So Familiar with Steve Martin

Let Me Die In My Footsteps