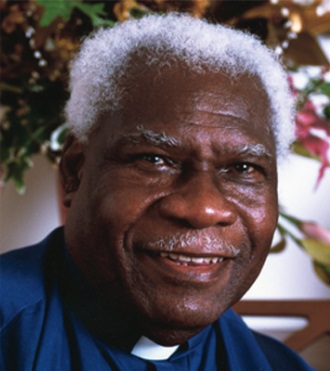 Faircloth (Bishop F.C.) Barnes was born in Nash County, NC on June 22, 1929. The Reverend Barnes was a gospel singer who grew up in Rocky Mount, singing, playing piano and directing the Marks Chapel Baptist Church choir. He began singing gospel music when he was 14. In 1955 he became a minister and in 1959 founded the Red Budd Holy Church; later, he was also pastor at the St. Paul Holy Church in Maple Hill. Bishop Barnes received a Doctorate of Divinity degree from United Christian College in Goldsboro.

The Reverend Barnes met The Reverend Janice Brown around 1979 while doing a radio broadcast in Rocky Mount on WSRV. On a reel-to-reel tape recorder, they recorded “It’s Me Again, Lord” for a radio broadcast; the response from listeners was overwhelming so they recorded it in a studio. In addition to “It’s Me Again, Lord,” they recorded “Come On In The Room.” AIR Records executive Wendell parker heard it and brought it to the attention of Ron Freeman, owner of AIR, the Atlanta International Records, a subsidiary of Malaco Music Group. Freeman offered them a recording contract.

The Reverends Barnes and Brown recorded eight albums; their biggest hit was “Rough Side of the Mountain” which reportedly sold half a million copies and reached number one on the Gospel Chart. It remained a popular song for The Reverend Barnes during his entire gospel music career.

In 1988 Rev. Brown married and left the duo; Bishop Barnes formed Company, a group that consisted of his nieces Deborah, Wanda and Lisa Barnes. He also formed the group, The Sunset Jubilaires, which continues to record for AIR. That group and the Red Budd Gospel Choir are now led by the Reverend Barnes son, Luther who has established a successful career of his own in gospel music.

The Bishop Barnes continued to record for AIR Records for over 20 years, recording 14 albums.

Bishop F.C. Barnes was based at the Red Budd Holy Church for over 50 years. He sang gospel music until he was 82; his last album, The Old Time Way was released in 2010 and nominated for a Stellar Award.