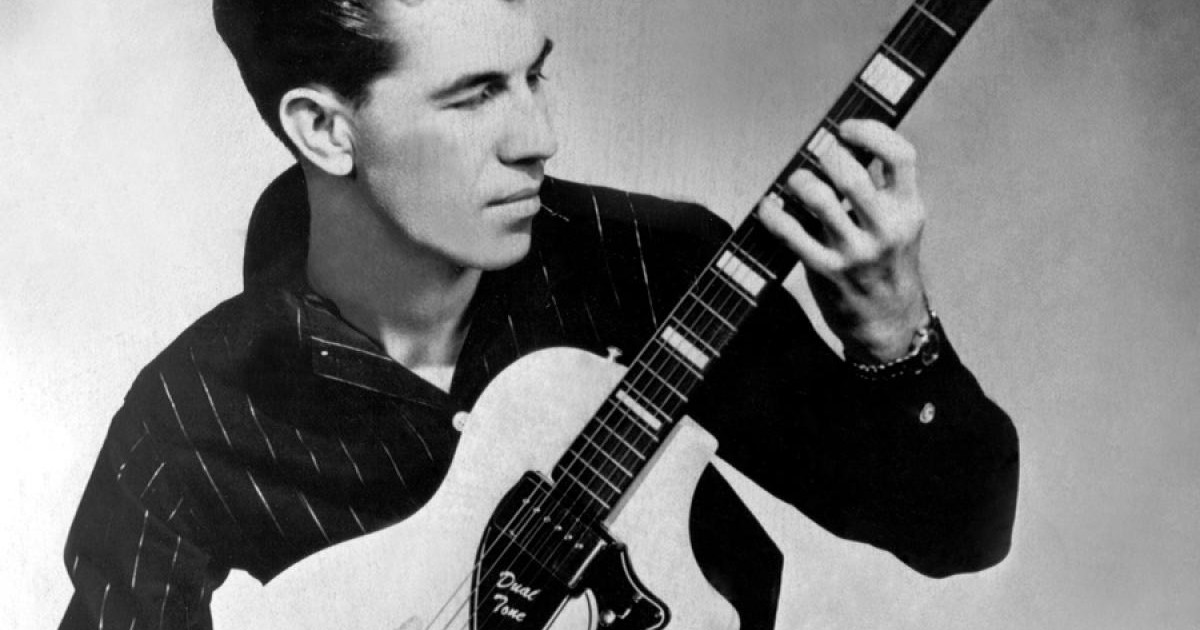 Link Wray was one of the most influential rock guitarists of the 1950s. His recording of “Rumble,” with distortion, fuzz tone and power chords had a profound influence on rock guitarists during that time and is enshrined in the Rock and Roll Hall of Fame.

Link Wray was born May 2, 1929 in Dunn, North Carolina. As a youth, he learned bottle neck guitar after moving with his family to Arizona. In his late teen years he formed a country band with his brothers Doug and Vernon, “Lucky Wray and the Lazy Pine Wrangers.”

His career was interrupted by military service during the Korean War, where he contracted tuberculosis, which led to the loss of a lung and an inability to sing.

After his discharge from the service, Link Wray re-formed his group as The Palomino Ranch Hands, comprised to Doug Wray on drums and Shorty Horton on bass; his brother, Vernon produced their recordings and occasionally played rhythm guitar and piano. They made their first recordings for Starday in 1955.

“Rumble,” written by Wray and Washington D.C. area disc jockey Milt Grant, was an attempt to have a guitar instrumental sound like a dance hall brawl. The fuzz tone distortion was created by Wray puncturing his amplifier speaker with a pencil.

In April, 1958, “Rumble” by Link Wray and the Ray Men on the Cadence label, entered Billboard’s Hot 100 chart and rose to number 16, remaining on the chart for 14 weeks and sold over a million copies.

Link Wray and the Ray Men’s next single, “Raw-Hide” was released on Epic and entered the Hot 100 Chart in January, 1959; it became a top 25 single and also sold a million copies.

During the mid-1960s, Link Wray retired to a family farm in Maryland, turned a chicken coop into a studio and recorded a number of songs, performing only occasionally in local bars. Those sessions were collected and released on the album Link Wray on Polydor.

During the 1970’s and 1980’s, Link Wray recorded albums for Polydor and Virgin, several live albums for independent labels, and resurrected his touring career. He was popular with fans and his live shows spotlighted his influential guitar sound. He is on a number of compilation albums.

Link Wray was part Shawnee and three of the songs he recorded have Native American titles: Shawnee, Apache and Comanche.
During the 1980s, Link Wray married a Danish student studying Native American culture and moved with her to Denmark, where he lived the remainder of his life.