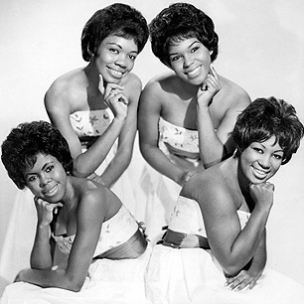 The Shirelles was an African-American girl group who’s singing style and recordings influenced a generation of girl groups. Two of the original members are from North Carolina. Shirley Alston Reeves was born in Henderson and Doris Kenner Jackson born in Goldsboro. Micki Harris and Beverly Lee rounded out the group. They were formed in 1957 for a talent show at their high school in Passaic, New Jersey. The song they wrote for that talent show, “I Met Him on a Sunday,” became their first single.

Florence Greenberg, mother of a classmate of the girls, signed them to her label and they released a string of hit singles, including “Dedicated to the One I Love,” “Tonight’s The Night,” “Mama Said,” “Baby It’s You,” and “Soldier Boy.”

Their biggest hit, “Will You Love Me Tomorrow,” was written by Brill Building songwriters Carole King and Gerry Goffin and became the first record by an African-American girl group to reach number one on the Billboard Hot 100 chart. It has been named one of the 500 greatest songs in the history of rock’n’roll by Rolling Stone magazine. Their record “Tonight’s The Night” is also on that list. With these and their other recordings, The Shirelles launched the girl group genre and the group was named one of the top 100 rock n’ roll acts by Rolling Stone magazine.

The group also made a cameo appearance in the film It’s a Mad, Mad Mad, Mad World and sang the title song for that movie.

Two of the original members of the group dropped out to marry and start a family and were replaced by Dionne Warwick. They were featured in the 1973 documentary, “Let the Good Times Roll.”

In 1996 the Shirelles were inducted into the Rock and Roll Hall of Fame. They have been honored with the “Pioneer Award” from the Rhythm and Blues Foundation and in 2002 were inducted into the Vocal Group Hall of Fame. The section of Paulison Avenue where Passaic High School is located was renamed “Shirelles Boulevard” and their group was the subject of a musical revue which appeared on Broadway.

Will You Love Me Tomorrow

“The Shirelles “Everybody Loves A Lover” performed Live 1964

Dedicated To The One I Love