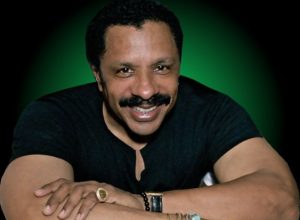 Ron Tyson was born in Philadelphia, Pennsylvania on February 8, 1948 but grew up in Monroe, North Carolina. He is a long time member of The Temptations.

Tyson’s grandfather, Horace Presson, had a radio show and a gospel music promoter. Ron traveled and performed with his grandfather and with this experience enabled him to develop an appreciation for gospel music, teaching him about the music business.

Tyson returned to Philadelphia and attended the Granoffsky School of Music where he studied opera and the guitar. The guitar lessons were short lived, but the techniques he learned in his opera classes are used in his performances, such as breathing techniques, scales, and being able to determine a perfect pitch.

Ron Tyson joined The Temptations after serving as lead vocalist for The Ethics, a group comprised of Carl “Hugie” Enlow, Andrew “Bike” Collins and Joe Freeman. The group was formed in Philadelphia in 1967 and signed with Vent, a small local independent label. After Vent folded, the group changed their name to The Love Committee, whose members included Tyson, Norman Frazier, Larry Richardson, Joe Freeman, and Michael Bell. The group recorded for TSOP, Ariola International and Gold Mind.

In addition to his singing (Tyson was known for his falsetto), he became a hit songwriter and producer. He wrote or co-wrote the majority of the songs for The Ethics and Love Committee and worked with artists such as the O’Jays, First Choice, the Salsoul Orchestra, Gloria Gaynor, Loleatta Holloway, Double Exposure, The Trammps, and Bunny Sigler. He also worked with Four Tops, Joe Simon, Curtis Mayfield, The Dells, Archie Bell and the Drells, Blue Magic and Harold Melvin, and the Blue Notes.

Tyson co-wrote and co-produced songs on Loleatta Holloway’s album Love Sensation and Curtis Mayfield’s album Heartbeat. Tyson wrote and produced for Norman Harris’ production company, The Harris Machine. This group wrote and produced recordings for The Dells, The O’Jay’s, The Trammps, and Joe Simon. Simon was instrumental in Tyson’s career, helping him with his songwriting and production. Tyson also worked with Harris-Baker-Young, Philadelphia’s disco rhythm section.

Tyson was a co-writer and background singer on Eddie Kendrick’s singles “He’s a Friend” (which reached number two on the R&B singles chart) and “Goin’ Up In Smoke,” which was also a chart single.

Tyson recorded a solo album, Christmas… My Favorite Holiday, in 2004. He released his second solo album, Recipe 4 Love, in 2012, which included a duet with Freda Payne.

Ron Tyson is still counting his blessings and very thankful to be a part of this wonderful and legendary group, The Temptations.

The Temptations- Just My Imagination

Got My Swagger Back