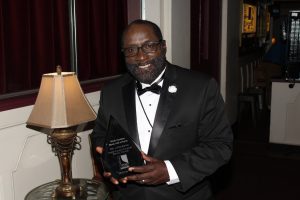 Luther Barnes was born into a musical family in Rocky Mount, North Carolina in March 1954. he is the son of  2015 North Carolina Music Hall of Fame Inductee Faircloth (F.C.) Barnes who wrote the gospel classic “Rough Side of the Mountain.”

At the young age of nine he realized he possessed a special gift and took on the role of directing the “On The Rise Youth Choir” at Redd Budd Holy Church.

Barnes graduated from Saint Augustine’s College in Raleigh, North Carolina with a degree in music education. From that point on, he went on to make a name for himself as a record producer, director, songwriter, composer, and lead singer of Luther Barnes and the Sunset Jubilaires and the Red Budd Gospel Choir.

In 1987, he released his first album, “See What The Lord Has Done.” over the course of his career, Barnes has released over 28 albums and performed with gospel legends such as North Carolina Music Hall of Fame Inductees Pastor Shirley Caesar and John P. Kee. Not to mention Kirk Franklin, Deborah Barnes, Harvey Watkins, and the Canton Spirituals, Lee Williams and the Spiritual QC’s.

in 1992, Barnes was awarded the Gospel Music Workshop of America award

in 2006, Barnes answered the call to preach under the leadership of his father, Bishop F.C. Barnes.

Today Luther Barnes is the senior pastor and founder of the Restoration Worship Center in Rocky Mount, North Carolina, which he established in January 2014. Barnes remains an active member of the gospel music community.

You Keep On Blessing Me