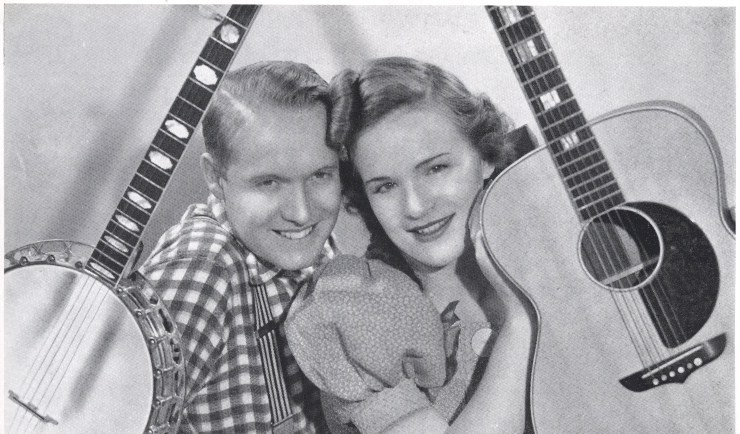 Lulu Belle and Scotty Wiseman were both born in North Carolina; she was born Myrtle Eleanor Cooper in Boone on December 24, 1913 and he was born in Ingalls on November 8, 1909.

Scotty’s family lived in western North Carolina for generations; he spent a year at Duke University; then moved to Fairmont, West Virginia where he obtained a part-time job at the YMCA and attended Fairmont State Teachers College. He took the nickname “Skyland Scotty” as an announcer on WMMN radio in Fairmont.

Myrtle Cooper moved with her parents to Evanston, Illinois when she was 16. After listening to WLS programs and The National Barn Dance, Myrtle’s father, John Cooper, took her to the radio station and told the executives that his daughter deserved to be on the radio.

Myrtle Eleanor Cooper became “Lulu Belle” in 1932 when John Lair, the director of the National Barn Dance, gave her that name and paired her with Red Foley as his Appalachian girlfriend. The two recorded together and did skits but Foley’s wife objected to the pairing, so she was then paired with Scotty Wiseman, who had moved from Fairfield after graduating from college to Chicago and appeared on WLS as a solo act until he and Lulu Belle were paired in early 1934. The two worked well both on and off stage and were married on December 13, 1934.

Except for the period 1938-1940, when they were on the Boone Country Jamboree on WLW in Cincinnati, Lulu Belle and Scotty spent their career on WLS in Chicago until their retirement in 1958 when they returned to North Carolina, living in the Blue Ridge Mountains in Spruce Pine.

Scotty Wiseman was a great songwriter; he wrote the classics “Have I Told You Lately That I Love You” and “Remember Me (When the Candle Lights are Gleaming)” and co-wrote, with Bascom Lamar Lunsford, “Mountain Dew.” He was elected to the Nashville Songwriters Hall of Fame in 1971.

Have I Told You Lately That I Love You

Does The Spearmint Lose It’s Flavor (On The Bedpost Overnight)

I Wish I Was A Single Girl Again