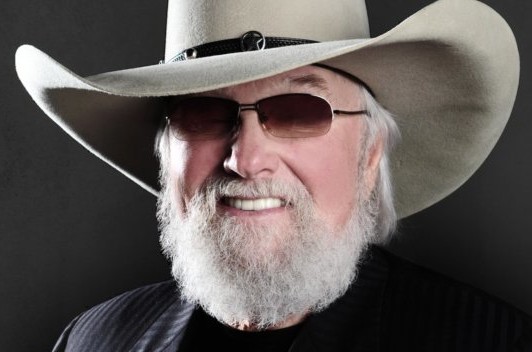 Charlie Daniels was born in 1936 in Wilmington North Carolina.

Charlie became interested in music and bought his first guitar at age 15. He taught himself how to play by listening to early Elvis Presley music on the radio.

After graduating high school in 1959 he formed a rock band called The Jaguars. While the band was on the road they made the recording of “Jaguar” with producer Bob Johnston. This was the beginning of a longtime association with Johnston who urged Charlie to go to Nashville to become a session guitarist. Following Johnston’s advice, Charlie made the move and became one of the most popular fiddlers in Nashville. There he worked with Bob Dylan, the Youngbloods, Leonard Cohen, Al Kooper and Marty Robbins.

In 1972, he formed the Charlie Daniel’s Band and in 1973, accomplished the hit, “Uneasy Rider.” Later, “Long Haired Country Boy” and “The South’s Gonna Do It” drove his 1975 collection, Fire on the Mountain, to double Platinum status. In 1976, Epic Records signed him to its rock roster in New York.

The contract, reportedly worth $3 million, was the largest ever given to a Nashville act up to that time. In 1979, Charlie broke through with the Grammy Award winning “The Devil Went Down to Georgia,” which became a platinum single and boosted the Million Mile Reflections album to triple platinum status. This was an album which represented the highlight of the band touring more than 250 days a year and logging, at the time, a million miles on the road.

The Charlie Daniels Band had two other albums, Full Moon and Windows, before his next big hit in 1989: Simple Man which went gold. In the new millennium the band released many patriotic works such as “It Ain’t No Rag, It’s A Flag,” “In America,” and “Iraq Blues” on The Land That I Love album.

Still today this talented and showy fiddler fuses hardcore country with hard-edged rock, boogie, and blues, to perform to an audience who enjoys his deep rooted southern style only defined by the Charlie Daniels Band.

The South’s Gonna Do It (Again)

Charlie Daniels In A 2010 Geico Commercial

The Devil Went Down To Georgia