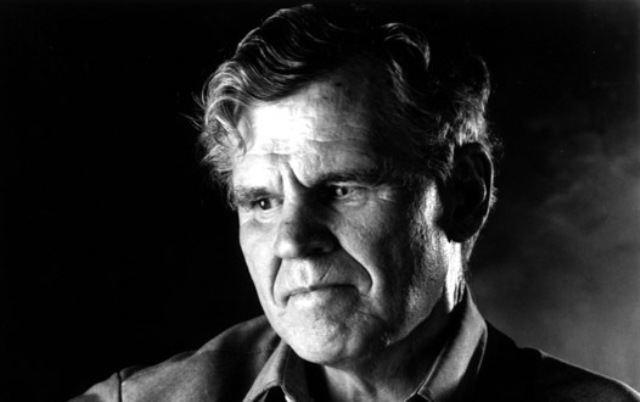 Arthel Lane “Doc” Watson was born on March 3, 1923 in Deep Gap. An eye infection caused Watson to lose his vision before his first birthday. As result, his parents taught him to work hard and care for himself. He attended the Governor Morehead school for the visually impaired in Raleigh.

Doc got his first guitar from his father and proved to be a natural, within months he was performing on local street corners with some friends. By the time he reached his adult years Doc had become a prolific acoustic and electric guitar player.

He got the nickname “Doc” during a live radio broadcast when the announcer remarked that his given name Arthel was odd and he needed an easy nickname. A fan in the crowd shouted “Call him Doc.” The name stuck ever since.

In 1953, Doc joined the Johnson City, Tennessee-based Jack Williams’ country and western swing band on electric guitar. Since they often had requests for square dances, Doc taught himself to play fiddle tunes on it.

He got his big break in 1963 for his performance at the renowned Newport Folk Festival. He recorded his first solo album in 1964 and began performing with his son Merle the same year. They toured and recorded together until 1985 when Merle was killed in a tractor accident on the family farm.

In 1997, Doc received the National Medal of Arts from President Bill Clinton. Then, in 2,000, he was inducted into the International Bluegrass Music Hall of Honor. Doc Watson hosts the annual “Merle-Fest” every April at Wilkes Community College. It’s named in honor of his son Merle and draws as many as 70,000 people.

In recent years, Doc Watson has scaled back his touring schedule. As of 2007, he is generally joined on stage by his grandson and one of his longtime musical partners.

In 2010, Blooming Twig Books published “Blind But Now I See” by Kent Gustafson, the first comprehensive biography of the seminal flatpicking guitarist.

He has won seven Grammy awards as well as a Grammy Lifetime Achievement Award. Watson’s flatpicking skills and knowledge of traditional American music are highly regarded.

After the folk revival waned in the late 1960s, Doc’s career was sustained by his performance of “Tennessee Stud” on the 1972 live album recording Will the Circle Be Unbroken. As popular as ever, Doc and Merle began playing as a trio, with T. Michael Coleman on bass, in 1974. The trio toured the globe during the late seventies and early eighties, recorded nearly fifteen albums between 1973 and 1985, and brought Doc and Merle’s unique blend of acoustic music to millions of new fans.

Recently, on June 19, he was accompanied by Australian guitar legend Tommy Emmanuel at the Bass Performance Hall. He also, accompanied by Holt and his grandson, Richard, performed at Hardly Strictly Bluegrass in 2009, as he had done in several previous years.