Opera tenor Anthony Dean Griffey was born in High Point, North Carolina and holds degrees from Wingate University, the Eastman School of Music, the Juilliard School and was a member of the Metropolitan Opera’s Lindemann Young Artists Program. He has won four Grammys and received both critical and popular acclaim for his performances.

Griffey sang the title role of Peter Grimes with the Houston Grand Opera and as Lennie in Of Mice and Men with Opera Australia. Other symphonic appearances include Beethoven’s Ninth Symphony with the Nashville Symphony, Britten’s War Requiem at Carnegie Hall with Seiji Ozawa and the Saito Kinen Orchestra as well as with Robert Spano and the Atlanta Symphony, and Mahler’s Eighth Symphony with Leonard Slatkin and the Detroit Symphony.

Griffey’s 2008 performance of Peter Grimes with the Metropolitan Opera was broadcast live in HD worldwide to movie theaters, featured on PBS and released on DVD (EMI Classics.) Also on DVD is Mr. Griffey’s Grammy winning Los Angeles Opera production of Rise and Fall of the City of Mahagonny (Euroarts) which also aired on PBS. Griffey’s performance in the 1999 Metropolitan Opera Tristan und Isolde and the world premiere of A Streetcar Named Desire (Image Entertainment) with the San Francisco Opera are also available on DVD.

In 2004, Griffey, accompanied by collaborator and fellow North Carolinian Warren Jones performed his solo recital debut at Carnegie Hall, performing a song composed by Andre Preven, who accompanied Griffey and Jones on piano during the performance.

Anthony Dean Griffey is Professor of the Practice at University of North Carolina at Chapel Hill.

Of Mice and Men by Opera

Interpreting A Character For Opera 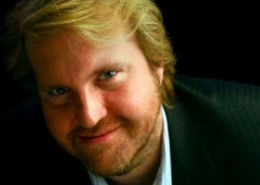