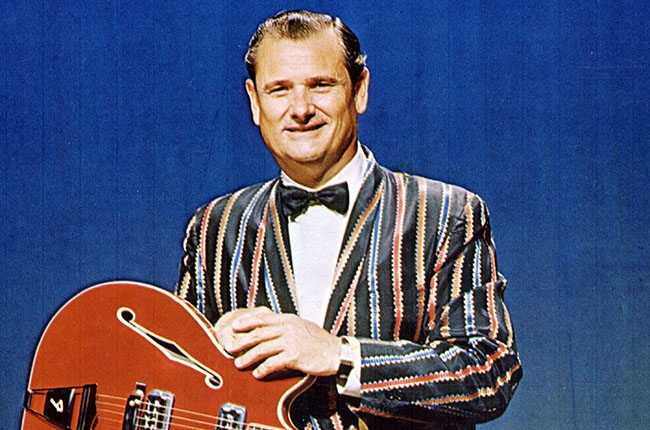 Arthur “Guitar Boogie” Smith has long been a leading figure in the musical life of Charlotte, North Carolina with his radio and television shows, recording studio and other music related ventures. His song, “Guitar Boogie,” originally recorded in 1945 became a huge regional hit that started a series of country boogie records, which were influential in the sound of early rock’n’roll.

In 1955 with Smith on tenor banjo and Don Reno on five-string banjo, he released “Feudin’ Banjos,” In 1972 it was recorded as “Duelin’ Banjos” for the Burt Reynolds blockbuster film Deliverance.

Arthur Smith was born on April 1, 1921 in Clinton, South Carolina and grew up in Kershaw, South Carolina. His father worked in a textile plant and had a jazz band… Arthur began his musical career playing trumpet in that band. He formed a Dixieland jazz ensemble with his two brothers, Ralph and Sonny and bassist Luke Tucker and performed on WSPA in Spartanburg in 1938.

The group did not have much success until they switched to country music and re-named themselves “Smith’s Carolina Crackerjacks.”

Arthur Smith was an early pioneer of the electric guitar in country music. He first came to Charlotte in 1943 and performed on WBT, filling in with the Briarhoppers and Tennessee Ramblers.

In 1944 he joined the Navy during World War II and after the service returned to Charlotte and again played guitar with the Briarhoppers and Cecil Campbell’s Tennessee Ramblers. In 1947 Smith signed with MGM Records and recorded guitar and banjo songs with the Crackerjacks and gospel songs with the Crossroads Quartet.

In 1948 Smith had a top ten country hit with “Banjo Boogie” and the following year with “Guitar Boogie” and “Boomerang.” During the 1950s and 1960s Smith had a daily TV show on WBTV as well as a weekly show that was syndicated; during the 1960s, Smith’s TV show was one of the top syndicated country music shows.

In 1963 Smith reached the charts again with “Tie My Hunting Dog Down, Jed,” a parody of Australian Rolf Harris’ hit, “Tie Me Kangaroo Down.”

During the 1980s he retired from performing and concentrated on his business interests. Arthur Smith wrote or co-over over 200 songs; over a fourth of which were hymns or gospel greats.