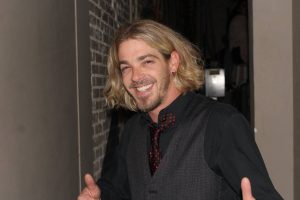 Born William Joe Covington II on November 8, 1977 in Rockingham, North Carolina. Bucky’s nickname came from his grandfather, Buck. He graduated from Scotland High School in Laurinburg, North Carolina in 1996 and worked in Covington’s Body Shop in Hamlet, North Carolina. Bucky learned to play guitar when he was 18 and began performing in local clubs, playing guitar, bass and drums as well as writing songs.

Bucky was a finalist on the fifth season of American Idol, where he finished eighth. During his appearances on the show, Covington performed a wide variety of songs, including “Simple Man” by Lynyrd Skynyrd, “The Thunder Rolls” by Garth Brooks, “Wave on Wave” by Pat Green, “Superstition” by Stevie Wonder, “Oh, Boy” by Buddy Holly, “Real Good Man” by Tim McGraw, “Best I Ever Had” by Gary Allan, and “Fat Bottom Girls” by Queen.”

After American Idol, Covington signed with Lyric Street Records and his debut album, Bucky Covington, was produced by Sawyer Brown, members Dale Oliver and Mark Miller. The album was released in April, 2007 and debuted at number one on the Billboard Country Albums chart. On that album were three chart singles, “A Different World (number six),” “It’s Good To Be Us,” (number eleven) and “I’ll Walk” (number ten).

Covington recorded a second album for Lyric Street that was unreleased because the label folded; however, three singles from that album charted: “I Want My Life Back,” “Gotta Be Somebody,” and “A Father’s Love (The Only Way he Knew How).”

It’s Good To Be Us

Drinking Side Of Country