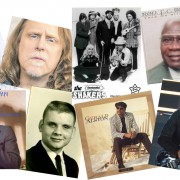 Kannapolis – The North Carolina Music Hall of Fame has announced the names of this year’s inductees. The ceremony will take place this fall. The following are the 2015 class of inductees: