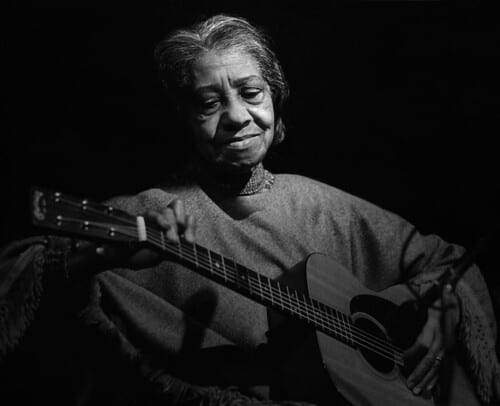 Elizabeth Cotten was born as Elizabeth Nevills on January 5, 1893 in Chapel Hill, North Carolina, raised in a musical family, she began playing her brother’s banjo at a young age before buying her own Sears and Roebuck guitar for $3.75 at the age of 11. Elizabeth was left-handed, but played a guitar strung for a right-handed player by turning the guitar upside down. That meant that the top strings were on the bottom and the bottom strings were on top, which resulted in a unique style known as ‘Cotten Picking,’ as she played the bass lines with her fingers and the melody with her thumbs.

Cotten began working as a maid at the early age of 8 years old. During her early teens she began writing songs, including “Freight Train,” which became a timeless song recorded by Peter, Paul and Mary; Bob Dylan; Joan Baez; His Name Is Alive; Doc Watson; Taj Mahal; Chet Atkins; Grateful Dead; and Mike, Peggy, and Pete Seeger. In 1910, when she was 17, she married Frank Cotten, giving up her guitar playing after they had a daughter. The Cottens owned homes in North Carolina and New York City, and settled in Washington, D.C. For 25 years, Elizabeth Cotten gave up playing the guitar publicly except for occasional performances at church, but fate had a way of bringing her back into music where her talents were recognized and acclaimed. However, at home her family always enjoyed her playing well into the night.

Elizabeth worked all her life, putting her many skills to work to overcome obstacles and face each new phase of her life with optimism. Proof of her progressive uplifting nature really showed through when she began a new career in music at the age of 70. She was working in a department store when she noticed a young girl who had gotten lost from her mother. Cotten helped the girl find her mother. That girl happen to be Peggy Seeger and her mother was composer Ruth Crawford Seeger of the famous Seeger family of folk singers, which included Mike, Peggy, Barbara, Penny and older half-brother Pete Seeger.

Charles and Ruth Seeger hired Elizabeth Cotten to work as a maid in their home. The Seegers were a musical family who often played at home, which led Elizabeth Cotten to teach her songs to the Seegers. Son Mike Seeger recognized Cotten’s talent and taped her playing; that tape became Cotten’s first album, Folksongs and Instrumentals with Guitar that was released on Folkways Records. That led to her touring and performing with Mike Seeger in concerts, which led to the folk community recognizing her unique talent.  Elizabeth Cotten performed with artists Mississippi John Hurt, John Lee Hooker and Muddy Waters during the folk revival of the 1960s. She performed at the Smithsonian Festival of American Folklife, appeared with Muddy Waters at the Newport Folk Festival, and toured the USSR with Taj Mahal.

The money she earned from touring and record royalties allowed her to buy a home in Washington, D.C. where she moved with her daughter and grandchildren. Elizabeth Cotten’s career continued into her 90’s and in 1984 she won a Grammy for Best Ethnic or Traditional Recording for her album, Elizabeth Cotten Live, released by Arhoolie Records. In 1989, Elizabeth Cotten was named one of the 75 most influential African-American women in the documentary I Dream a World. Prior to her death, Elizabeth purchased homes in Syracuse, NY, where she lived until her death on June 29, 1987 at the approximate age of 103. She was named ‘A Living Treasure’ and has a park and statue in her honor in Syracuse.