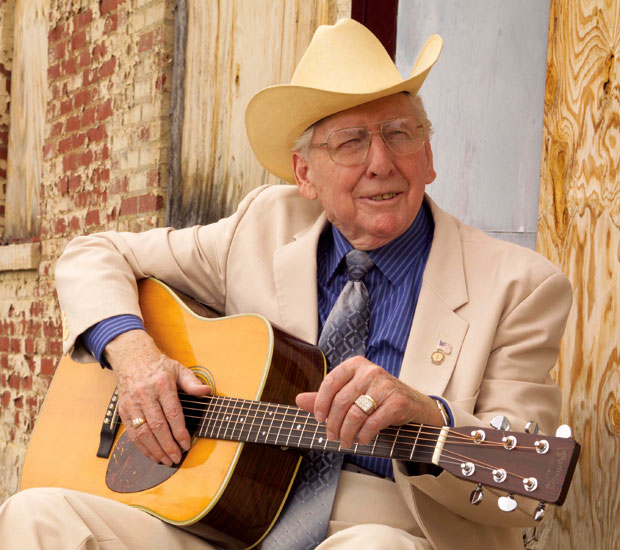 The roots of bluegrass grow deep into North Carolina; the sound of the Earl Scruggs-style of picking the banjo and the mandolin “chop” made popular by Curly Seckler, both go back to musicians born and raised in North Carolina.

John Ray Sechler was born in China Grove, North Carolina on Christmas Day, 1919; he became “Curly” when his hair grew out. When he released his first album in 1971, he changed to spelling of his last name to avoid confusion over its pronunciation.

Curly Seckler’s father played fiddle, autoharp and harmonica; his mother played guitar and organ. It was his mother who taught him and his brothers some guitar chords and launched them on their musical journeys.

As youngsters, Curly and his brother worked in a local cotton mill. His father died when he was just nine, leaving behind a wife and eleven children. Curly bought a five-string banjo from a local musician, Happy Trexler, and then Curly and his brother, Marvin, joined Trexler in a local band. The Sechlers soon formed a family
band, with four brothers performing as the Yodeling Rangers and quickly landed a daily radio show in Salisbury, North Carolina. Shortly after, they changed their name to the Trail Riders.

When he was 19, Curly Seckler joined Charlie Monroe’s group after the Monroe Brothers broke up. After performing with Monroe for about six months, Seckler returned home and rejoined the Trail Riders. In 1941, Curly bought his first mandolin. Over the next two years he toured with Tommy Scott and then with Leonard Stokes. He enlisted briefly in the Army Reserves during World War II, but was unable to serve due to bronchial asthma.

Curly Seckler performed with a number of groups, including the Happy Valley Boys, the Smokey Mountaineers, and Mac Wiseman’s Country Boys before he teamed up with Lester Flatt and Earl Scruggs in 1949.

In 1953, Seckler moved with Flatt and Scruggs to Nashville and in 1956 the group became members of the Grand Ole Opry. Curly was in Flatt and Scruggs’ band when the group recorded its most famous numbers, including “Foggy Mountain Breakdown,” “Roll in My Sweet Baby’s Arms” and Salty Dog Blues.”

Seckler performed with Flatt and Scruggs until 1962. In 1971 he released his first solo album and in 1973 joined Lester Flatt’s group, the Nashville Grass. After Flatt died in 1979, Seckler took over the group until their retirement in 1994. Since then he has
continued to perform at several events each year and has released three albums.

In 1996 Curly Seckler received a Distinguished Achievement Award from the International Bluegrass Music Association and in 2004 was inducted into their Hall of Fame. In 2010 he celebrated his 75th Anniversary in music.

I Heard My Mother Call My Name

Ain’t Nobody Gonna Miss Me When I’m Gone