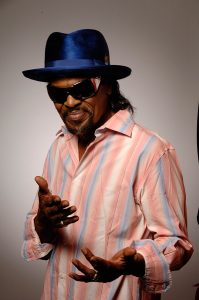 Charles “Chuck” Brown was born in Gaston, North Carolina on August 22, 1935. He was a guitarist known as “The Godfather of Go-Go,” a subgenre of funk music that originated in the Washington, D.C. area during the mid and late 1970s.

In Gaston and later in Virginia, Brown’s mother and stepfather lived in shanties and usually made their meager living by picking cotton. By the time he was five, the family had moved to Virginia then settled in Richmond before relocating to Washington, D.C. in 1942 when he was seven years old.

Brown became a legendary guitarist, playing his blonde Gibson ES-175 with his band, Los Latinos, then with The Soul Searchers. “Go Go” was a term used for clubs in the African-American community and here Brown developed his “Go Go” sound based, he said, on black gospel from the church. There was extensive funk style jamming with heavy percussion built on the bass drum, snare, hi-hat, timbales, cow bell and, especially, the Conga drum. One song blended into another to keep dancers on the floor as the band played a blend of rhythm and blues, funk and early hip-hop.

Chuck Brown made his first albums, We The People and Salt of the Earth as a member of The Soul Searchers in 1972 and 1974. His first solo album, Bustin’ Loose, was released in 1978 and his second solo album, Funk Express, was released in 1980. These were followed by We Need Some Money (1984). Chris Blackwell, founder of Island Records, heard the single, “We Need Some Money” on a radio station in New York and signed several go go bands to his label. Chuck Brown was signed to an Island subsidiary, 45h & B’Way.

Brown has received much recognition over the years with the Chuck Brown Memorial Park in D.C. and street naming for Chuck Brown but the most notable is the National Endowment for the Arts Lifetime Heritage Fellowship.